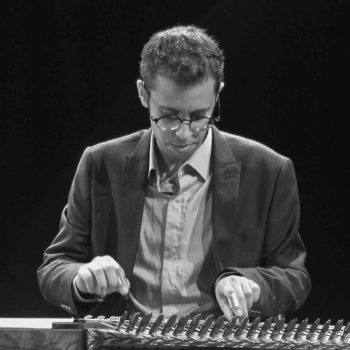 He studied at the Regional Conservatory of Kairouan where he obtained the national diploma of Arabic music in 2009, before receiving his instrument diploma in qanun in 2011. His participation in the Festival of Young Musicians in 2006 was crowned with first prizes: in the qanun category as well as for the entire festival. In July 2013, he participated in the “Neapolis Music Days”, during which he won the first prize with an “excellent” mention of the “very advanced” category and the Golden Rabeb of the same competition.

Recognized as a young talent, he played in February 2014 at the Festival Young Virtuosi in Ennejma Ezzahra and in October 2014 at the International Festival of Peoples in Aradeo, Italy. In June 2015, he participated in Istanbul’s second Ottoman Music Summer School organized by the University of Istanbul, benefiting from six masterclasses with qanun virtuoso and renowned composer Göksel Baktagir.

Regularly invited to present his instrument and Tunisian music at national and international festivals, he notably performed at the Desert Vert Festival in Morocco, at the International Celtic Harp Festival in Dinan, France, at the Babel Sounds festival in Hungary and at the Eastern Music Summer Academy in Sulzburg, Germany. He played with several well-known national music ensembles, including the Rachidia (national orchestra of traditional instruments) and the Tunisian Symphony Orchestra, with whom he gave an unprecedented performance of Vivaldi’s Concerto in C Major RV 93 in an adaptation for qanun under the direction of Pierre-Yves Gronier.

After publishing in 2012 a collection of 57 works of his composition in the traditional Tunisian style (bachrafs), Mohamed Amine is currently deepening his research on traditional forms of Tunisian music. He is also working on the development of a new method of playing facilitating the adaptation of Western works (including baroque music written for lute). His first album, Mukkadima, released in 2017, is an anthology of anonymous pieces from the Andalusian repertoire of Tunisian music, completed with works of his composition.

In parallel of his musical career, he holds an MD degree from the University of Medecine of Tunis and is currently pursuing a Masters in musicotherapy. 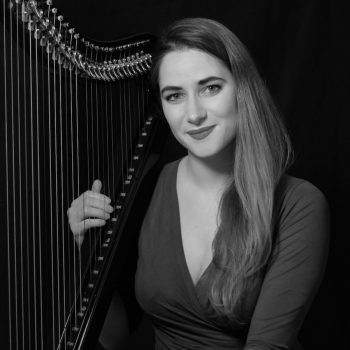 Maia Darme is one of the most exciting and versatile harpists of her generation. Hailed as an ambassador for her instrument, she has earned an international reputation for her commanding on-stage presence and captivating performances. An active soloist and chamber musician, she has performed in over 25 countries on all continents.

Born in France, Maia started playing the harp at the age of six. After receiving the first prize of the French Union of Musician Artists’ competition by unanimous decision and with the highest distinction at age nine, she went on to learn under the guidance of some of the world’s most acclaimed harpists (Alice Giles, Park Stickney, Elisabeth Fontan-Binoche, Marie-Pierre Langlamet, Xavier de Maistre, Isabelle Moretti, Jana Bouskova…).

Having graduated from the Bordeaux and Paris conservatories, she moved to Australia to complete her Bachelor in Harp Performance and Composition at the Australian National University. There she performed across the country with the much-loved Seven Harp Ensemble (SHE) following the release of their “Bolmimerie” disc. Maia’s studies also took her to Columbia University, New York, for a Global Exchange Masters in Composition and Electronic Music at the renowned Computer Music Center. A recipient of the Gatsby foundation’s Arts Initiative program, she worked extensively on writing for the harp with emerging composers, commissioning new pieces for her instrument. Maia later rounded up her education with a Masters degree in Jazz Harp at the Conservatory of Milano, Italy.

Passionate about expanding the repertoire available for her instrument, she has had the pleasure of premiering over 40 pieces, including Venezuelian composer Carlos Andrés Mejía’s Concerto for Harp and Orchestra “Solstice Lunaire” and Tunisian composer Samir Ferjani’s Opera “Sheherazade” for soloist harp and kanun on stage. She is also a prolific arranger, whose scores are published by Profs Edition and SMP Press.

Equally at ease playing historical, traditional or electric harps, Maia has notably joined forces with world music, jazz, experimental electro, punk and reggae bands. Through numerous art residencies and stays in Maghreb and West and Central Africa (Niger, Guinea, Libya, Tunisia, Senegal, South Sudan…), she studied traditional music forms, teamed up with local musicians, taught workshops and worked on developing new playing techniques to help the harp grow in unexpected styles. Besides, having a taste for theatre, she performed extensively as an on- stage musician and singer in drama productions and musicals, as well as with French dance companies. She also holds a Masters in International Affairs from Sciences Po Paris.